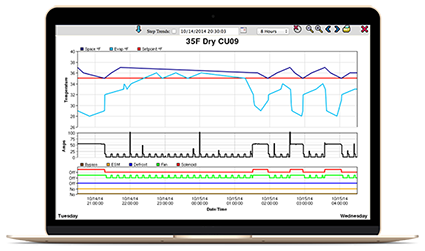 Some of the best places to gain insight on the future outlook of specific technologies or industries are trade shows, conferences, and educational sessions hosted by industry leaders. Often, a new technology or product will ignite a flurry of buzz and anticipation, but without a full understanding of its impact or integration into its particular market vertical. At events that gather the best minds of their industries, fleshing out what a new product, fad, or trend is, does, and affects, is usually a focal point for multiple speakers—most things are best viewed through multiple, different-colored lenses. This is especially true when the buzz is industry-wide and seemingly unavoidable.

In the world of commercial and industrial refrigeration, this particular maelstrom of a topic is smart technologies connected through The Cloud. Or, in its more recognizable and widespread moniker, the Internet of Things.

At this year’s AHR Expo, the most anticipated, and attended speaker session revolved around Global HVAC Trends. And within that broad spectrum, nothing kept attendees more interested than discussing the incorporation of smart technologies. The session was hosted by the Building Services Research and Information Association (BSRIA). In the commercial and industrial sectors, specifically, the BSRIA sees huge growth potential for smart platforms because it indisputably helps people on both sides of the coin: the end-users as well as contractors.

Anette Meyer Holley, general manager of air conditioning and refrigeration, BSRIA, sees service and maintenance as an industry to benefit greatly. “We estimate the U.S. market to reach some $8 billion in 2018,” Holley said. “Smart platforms have accelerated, and smart maintenance has become a real business opportunity.”

Predictions forecast that B2B IoT will generate more than $300 billion annually by 2020, including nearly $100 billion in the industrial sector. This compared to an estimated $900 million in as recently as 2015.

In regards to Building Automation and Control Systems (BACS) in the U.S., field devices comprise 44 percent of the market, software/hardware is 15 percent, and controllers are 41 percent.

Most BACS are still installed as standalone systems focused on HVAC — 80 percent or so in the U.S. and 70 percent in Europe, according to Lone Hansen, research manager, BSRIA. “There are increasing sales of software, but they are still low,” she said. “Many devices today are IP [enabled], and a growing number are connected to a physical network.”

“Suppliers are largely leaving the hosting choices to the end users, but there are also still security concerns in regards to a private vs. public cloud, and few suppliers currently sell software as a service (SaaS),” she said. “Software is often sold with hardware to add value. The uptake is low due to it still emerging. Suppliers are still looking at the business model, and many end users are nervous because of the security concerns.”

But once someone’s concerns are assuaged, they’re usually ready to go all-in on the technology and its potential positive impact on their business.

“The biggest trends in BACS include wireless technologies, use of IP, individual user control, and artificial intelligence being used to predict and prevent data,” said Hansen. “There are more and more intelligent controllers with no need for gateways. There are also home devices being used in commercial applications. Still, cyber security is one of the big issues and the main reason uptake is not as high as it could be.”