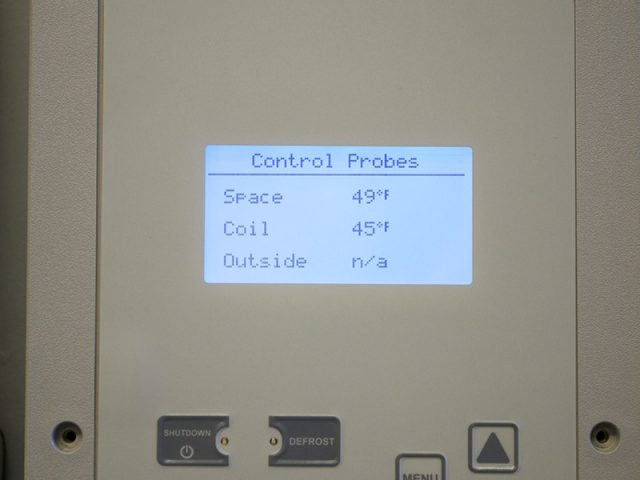 In refrigeration applications, most temperature sensors, of any design type, electronic or gas-filled, are intended to respond very quickly to changes in ambient air temperature. This allows for precise measurement and control of temperature fluctuations. However, in some cases it is desirable to measure temperatures with a slower-responding sensor.

For example, if you wanted to track something like the internal temperature of stored product, which typically changes much more slowly than the air in the refrigerated space. This can be easily accomplished by putting an insulating material around the temperature-sensing bulb. That material could be rubber, or expanding foam, or anything that will provide additional thermal mass around the sensing element. But the industry standard for this type of sensor is to suspend the sensing element in an oil bath, typically in a cube-shaped enclosure somewhat smaller than a deck of playing cards.

These Oil-Filled Temperature Sensors are most commonly used in situations where the monitoring point is intended to mimic internal product temperature, rather than to precisely measure the surrounding air.

A simple experiment illustrates the difference that oil-filled sensors provide: if you put two room-temperature thermometers in your home refrigerator, but have one sitting in a small cup or vial of cooking oil, you will notice that the non-oil-suspended thermometer very quickly shows the correct temperature inside the fridge (usually about 35ºF). The one suspended in oil will typically take significantly longer to reflect the temperature change. Same thing when you take them out of the fridge and put them on a countertop. The bare thermometer quickly reflects the actual air temperature, while the oil-filled sensor shows a slower change that resembles the internal temperature of food.

The common and obvious application for oil-filled temperature sensors is for food safety historical monitoring (NRM offers a variety of sensor types, including oil-filled sensors).

NRM does not recommend the use of oil-filled sensors for control purposes. A meat thermometer inserted in a roast is useful to tell you when the roast is done, but you would not want to use that measurement point to control the oven temperature — the oven might reach over a thousand degrees and burn the outside of your roast before the inside is cooked!

Better to control the ambient temperature precisely, and measure the product temperature separately, if needed.

Can Oil-Filled Sensors save energy, when used for control purposes?

This is a difficult question to answer precisely, because using an oil-filled sensor as a control point changes the operation of the controlled equipment.

In effect, using an oil-filled sensor is very similar to using a wider deadband.

However, there are offsetting savings from using narrower deadbands, since the air contracts and expands when the temperature changes, forcing air into and out of the cooler doors and seals during wide temperature swings. The engineering calculations depend on a number of variables, especially how well-insulated the cooler is compared to how well-sealed it is. A cooler where the doors are frequently open may perform differently than a well-sealed one for purposes of achieving energy savings.

To this point, NRM typically recommends fast-response, highly-accurate control sensors for a number of reasons.

The most obvious reason is that any energy benefit gained by running a wider deadband can be improved significantly simply by using a very precise deadband closer to the “high” temperature limit. In other words, if it is acceptable for the cooler air and product surface temperatures to reach 42º between cooling cycles, then it is better to use a precise control that allows a deadband up to 42º than it is to use a vague deadband with “wooly” temperature measurements.

Perhaps more importantly is the question of whether it is more important to maintain average internal product temperatures versus maximum product temperatures (both internal and surface). NRM does not set food-safety guidelines. Our energy-savings strategies are based on duplicating the existing performance of the equipment, not based on raising the average or maximum operating temperatures of the cooler. So it is important to base your decision off of your product’s specific requirements.

NRM offers inexpensive oil-filled sensors for our control products. If you need them, just ask, and we will be happy to help!