Refrigeration Problem of the Week: Freezer Compressor at Risk 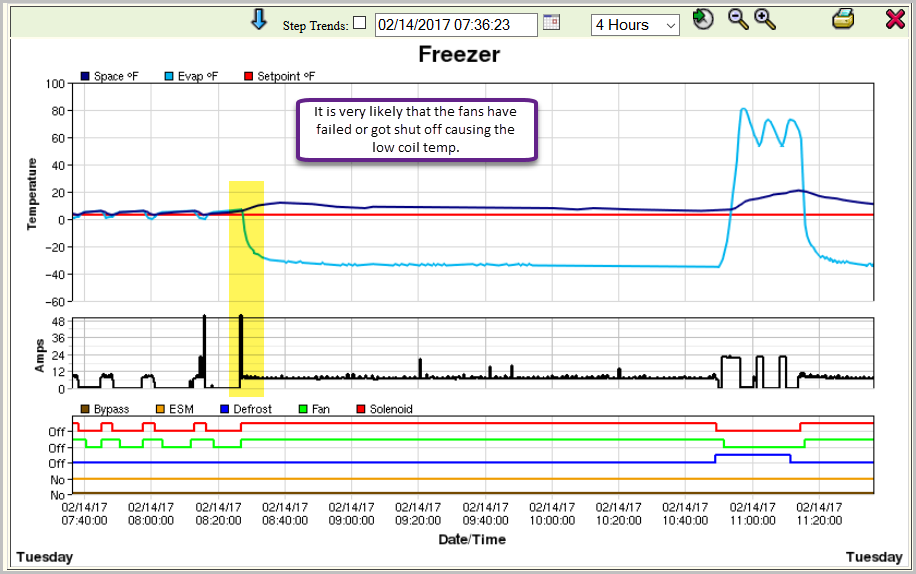 In this new weekly blog series, NRM will highlight an issue a customer had and was able to resolve with our industry-leading control and monitoring solutions. Some of the most major refrigeration problems can go undetected and result in equipment failures and/or product loss.

Problem of the Week: Freezer Compressor at Risk

As is often the case with large, complex systems that we don’t personally have the appropriate knowledge or training for, owners/operators, mangers, and regular staff usually regard their business’ commercial or industrial refrigeration equipment with an “out of sight, out of mind” mentality. Without the necessary technical expertise to professionally diagnose a problem, they either pay the system little to no attention, or interact with it and don’t consider the consequences (because they’re not aware any exist). This can often lead to many, expensive service calls or, worse, an issue that can not only degrade the equipment but ruin it.

This new blog series, NRM’s Problem of the Week, will take a look at real-world situations where unique control and monitoring tools averted disaster for a business.

A client who owns a campus of seafood-related cold storage facilities began receiving alerts at the start of the business day on a Tuesday regarding one of the facilities’ main compressor.

The alert sent to both his e-mail and his mobile device read:

The client knew right away that this was an issue that needed investigation. His system was wasting energy (and money) and risking the equipment if everything was running full-bore but no cooling was actually being performed. An average temperature probe, like the kind often integrated with basic Energy Management Systems, will see that space temperature and obviously think the space is cold enough and not require more cooling. NRM’s monitoring software, based on the custom cooling schedules and settings for this particular client, processed it as a problem right away.

There are several reasons why this particular alert gets sent out to a client:

2. The coil sensor may have failed and is reading the space as a high temperature which would stop the fans’ operation.

3. The evaporator fans were shut off.

With monitoring software, there are clear actions to take to remedy this type of issue, making service calls more efficient and troubleshooting easier.

For instance, in this particular case, the performance trends were consulted to see if there were any abnormalities in coil and space temperatures, as the monitoring software tracks both in real-time. If this revealed that the coil temperature was high due to probe failure, replacing the probe could have been scheduled as soon as possible.

The dashboard associated with the monitoring tools also provides a table showing how often, and when, the evaporator fans run. In this particular case, these tables were consulted to see if the fans had failed or were shut off. Whether by a tripped breaker, a blown fuse, or employee negligence, the fans being turned off pose great dangers to both the equipment and the stored product.

The performance trends showed that the fans were clearly turned off and when:

The facilities owner contacted the tenant of this cold room and the tenant confirmed they did, in fact, shut down the evaporators (for whatever reason!). You can see in the trend above how doing so affected both the routing cooling and defrost schedules put in place to have the most efficient operation. The moment the fans were turned off, the system started wasting energy (and money).