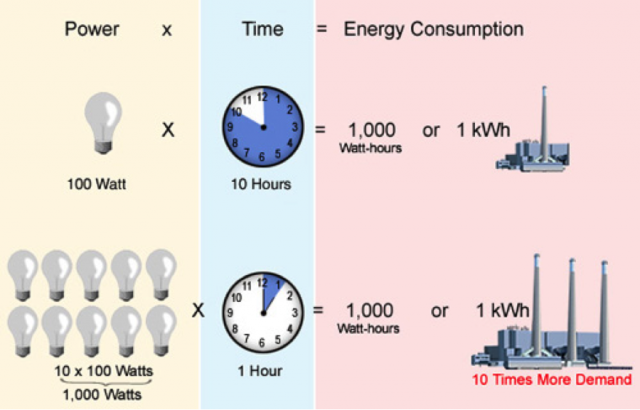 In the first part of this blog series on energy consumption and peak energy demand, we explored the differences between the two and what they mean for your business in terms of energy usage costs, through examples.

In today’s post, we will go more in-depth into peak demand reduction. As mentioned before, there is an industry shift toward the adoption of internet-based monitoring systems to improve the transparency between your refrigeration system’s performance and its direct effect on utility expenses. Below is an example of how internet-based technology can reduce peak energy demand.

This is a real-world example.

Basic demand reduction in refrigeration and HVAC systems comes from staging on-times of various pieces of equipment to limit the amount of total current draw at any one time. Effective demand-limiting strategies will often increase overall energy usage, but they have the potential to yield a lower electric bill in facilities where demand charges are high.

An internet-based system makes it possible to overcome some of the unique challenges of reducing peak usage in critical-temperature applications. Most of the online services are not specifically demand-limiting technologies, but they offer a variety of ways to balance multiple requirements—such as precise temperature control while reducing the overall load during peak billing hours.

Example Strategy (without an internet-based system)

As an example, consider a facility with four walk-in coolers, each with a desired temperature of 38°.

One possible strategy might be to overcool units 1 and 2 to 33° and then raise their setpoint to 40° for 20 minutes. While coolers 1 and 2 are allowed to “drift” in temperature, coolers 3 and 4 may be overcooled in turn to 33°, and then allowed to drift to 40° themselves when coolers 1 and 2 come back online.

During peak billing rate hours, the sets of refrigeration could be alternated in this way so that only one-half of the coolers are operating at any given time.

This strategy is less energy efficient than more straightforward temperature control, but it could significantly reduce peak demand charges in a facility where refrigeration accounts for a large part of the electric bill.

The primary challenge with implementing a strategy such as the example above is that real-world vagaries and unpredictability frequently do not cooperate with the idealized usage that we envision when first implementing such a strategy.

These variances become acute concerns when we consider that demand billing often depends on a very brief period of peak power consumption. So if the strategy doesn’t work effectively, then it is simply increasing overall energy usage, possibly raising the electric bill.

For instance, it may be the case that 20 minutes is too long of an off-time and that coolers are coming back on before their drift cycle is over. Or we may find that coolers will indeed drift successfully for 20 minutes but that they need 40 minutes of runtime to recover down to 33°. In this case, we might try a revised strategy that has all coolers on overlapping, staggered drift schedules with longer on-times.

Ordinarily, this kind of fine-tuning is expensive, time-consuming, and difficult to verify. Often, the risks and challenges of trying to reduce peak usage outweigh the potential benefits unless there is some easy way to make adjustments in response to real-world observation of the equipment.

Advantages with an internet-based system

Internet-based systems make the “fine tuning” aspect of this type strategy much easier and less costly. The ability to view historical trends and real-time operation of multiple coolers at once takes the risk out of experimentation by allowing the user to rapidly verify and evaluate whether the strategy is working.

With some of these cloud-driven applications, it is possible to create customized individual schedules that are built around the real-world variables in specific temperature zones.

For instance, one cooler may be observed to have excess capacity and could be set to long drift times and short recovery times. This could offset another cooler that has to run nearly constantly to maintain temperature.

Using an internet-based system allows a facility manager to easily and quickly test different strategies and settings and then analyze the results. It’s all about using “big data” to drive our decisions.

A facility manager could conceivably gather and review historical data to improve overall strategies that may include other systems—like locking out HVAC zones or inside lights during peak hours. Combined with knowledge of utility billing structures, the historical data afforded by web technologies allows for powerful control of an overall energy strategy that works with the real-world requirements and conditions of the facility.

In part 3, we will take a look at how these innovative technologies can help you wrangle your energy consumption expenses, and hopefully share some strategies or examples that you haven’t considered before.