We all know ice is great; it’s cheap, can be bought in bulk, and cools most things that we can think of that need to be cooled. But there are several kinds of undesirable ice that end up costing a lot for operating refrigeration equipment in commercial and industrial coolers and freezers. This type of ice is costly, problematic, and can go undetected without proper awareness. We are talking about the ice that forms on the evaporator coil, and builds up on ceilings, floors, and piping.

When an evaporator coil has ice building up, efficiency drops dramatically, the room can’t reach set temperature set points, it could damage equipment, and it puts perishable products at risk. Run time increases and operating cost can potentially go up by over 100%. The ice that forms on coils is usually removed by scheduled defrosting but there are some situations or conditions where a full defrost does not occur and ice begins to build up. Ice impedes airflow, the coil gets even colder (thus making more ice), and without some protection, it will put the compressor at risk of catastrophic damage if liquid is allowed to enter the compressor chambers.

Most operators of refrigeration equipment have experienced compressor damage due to ice buildup, which is the type of problem that requires an emergency call to a service company. Since refrigeration is the kind of repair that “can’t wait until Monday,” costly steps, overtime, and a scramble to save product ensues.

We all know the problem but let’s discuss some of the most common causes and how to avoid costly repairs and higher energy use.

Most can be prevented or at least caught early before they turn into an emergency:

The drain pan under the coil collects any melting ice from the coil. There is a drain line at the bottom to discharge water out of the cold room and to the sewer or other safe location.

If the drain line gets plugged, the water level in the pan rises until it reaches the cold coil and it begins to freeze the water in the pan, which absolutely blocks the drain.

Another condition that often occurs when the drain in the drain pan is plugged, but the defrost is melting some of the ice, the clog overflows the drain pan and the liquid ends up on the floor of the cooler or freezer.

Ice on suction line piping leading back to compressor

Where does ice in coolers and freezers come from?

The source of all of the ice comes from the air inside the cold room. As warm air from outside enters the room in the form of humidity, it will condense on the coldest surface in the room, which is always the evaporator coil that is cooling the room.

In some cases, the product entering the room is wet and will begin to evaporate upon entering the cool temperature.

Some products are packed in ice (fish, broccoli, celery or produce with high water content) or are naturally wet, and that moisture ends up in the air. As it passes across the cold coil, it condenses and can freeze on the coil.

How to stop & prevent making expensive ice and eliminating it once formed?

First it is very important to keep coils clean from dirt and dust build up as shown below:

Iced up evaporator coils can cause everything from minor damage to compressor failure, and drastically reduces the efficiency of your refrigeration system

Check for ice regularly, especially on humid or rainy days when moisture in the air is high

Look in front through fan blades and behind the coil where it is easily seen: 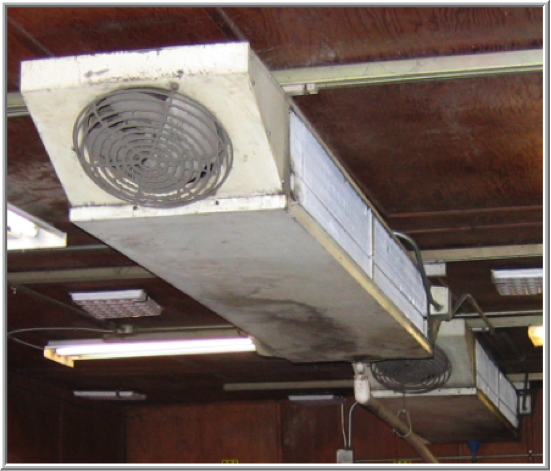 If ice begins to form regularly even after defrost, have your service technician check for causes. The money spent for correction is usually less than the ongoing energy waste.

Learn how to initiate defrosts and start one whenever severe icing is observed.

Evaporator fan failure or a tripped fan circuit breaker stops air flow, and the coil will ice up as temperature in the coil will likely be 20-30 degrees below space temperature, making the coil a strong magnet for moisture condensation. Immediate action is recommended as this condition can also result in potential damage to the compressor due to liquid coming back from the evaporator.

Another culprit has to do with activity where the main loading door is open for long periods of time allowing warm moist air to enter the cold room which causes refrigeration to run longer and work harder to remove the moisture in the air, making expensive ice.

Typically, defrosts are scheduled events initiated by a timeclock with set durations and terminations.

In problem areas where there is more moisture due to weather or more is generated because of daily operation, scheduling more defrosts is one way to solve the problem.

Technicians usually set defrost schedules for worst-case scenarios and sometimes that can be wasteful as well. Especially when electric defrosts are the method.

Consider installing smarter controls that are designed to sense ice buildup and initiate defrosts on demand. *

So now let’s discuss how much it can really cost when ice builds up on evaporator coils, floors, walls, and piping. (When you think how easy it is to prevent it and yet it still happens.)

* Modern electronic smart controls that provide real time visibility can solve some of the expensive ice issues, especially for large refrigerated and frozen cold storage and distribution facilities. These types of controls offer operations and plant managers, who may not otherwise be able to visually inspect evaporator coils that are 20 to 30 feet high in back of racks and inventory, an eye in the sky, so to speak. Cloud-based refrigeration management provides the ability to get alarms, and to centrally control and optimize refrigeration equipment performance (see Figure 1 below which shows an evaporator iced up). If that’s not possible, regular visual inspections, cleaning and maintenance is the first place to start.