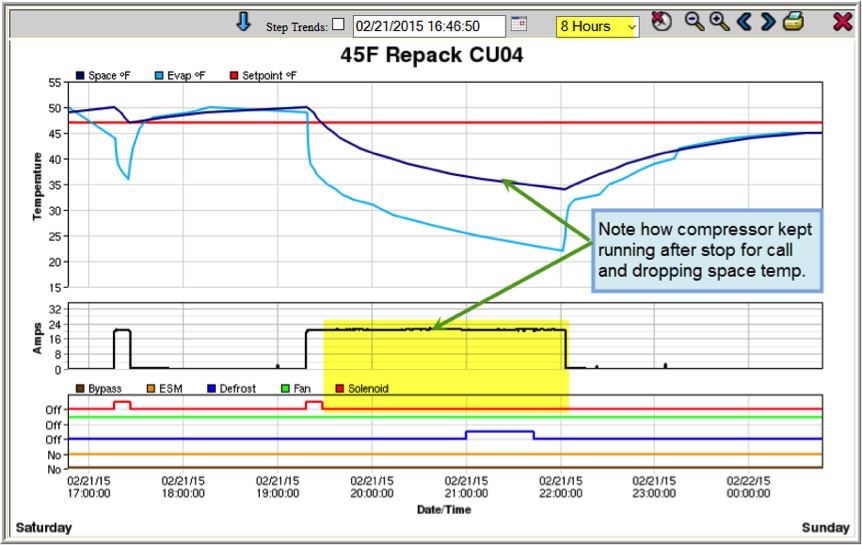 When it comes to the relationship between good performance, energy usage, and commercial/industrial refrigeration, there are many components we need to be cognizant of to ensure harmonious operation. In many cases, we know if and when the refrigeration system is running but do we know how well it’s running?

Like with our post about compressor short cycling, today’s topic focuses on an out-of-sight, out-of-mind component that could negatively affect your system’s performance and result in increased energy consumption: liquid-line solenoid valves and their potential issues.

The solenoid valve is an integral piece of an efficiently operating system. It is electrically switched open by the thermostat during a call for cooling, and its basic function is to be in either a fully closed or fully open state to prevent or allow refrigerant flow. The valve is equipped with an electrical coil that acts as a magnet when energized, which lifts a plunger to open the valve or spring it closed. Internally, it is a very precise-machined needle valve that in the closed position must prevent even the slightest flow of liquid refrigerant. Otherwise, it can cause a number of hard-to-identify problems.

How it works: When energized, one can hear a noticeable snap or click, and the process of converting electric power into mechanical power is started by allowing liquid refrigerant to flow through an expansion device into the evaporator. The liquid passes from high pressure to low pressure, where it boils, absorbs heat in the evaporator, and returns to the compressor as a gas. The gas is compressed (pressurized), and then the heat resulting from compression is released in the condenser, where it turns back to a liquid ready to be passed through the solenoid valve. It is usually a very simple, but important device in the cooling process and must be extremely reliable for cooling to work properly.

But this is the type of mechanical apparatus that if it experiences a malfunction, it won’t be one that presents itself to the naked eye. In most instances where the valve has an issue, the cooling system is able to keep operating but it may cause more system energy consumption. You may not lose product, or experience big dips in temperature, but your electric bills may climb unexpectedly.

Typical issues with this device include:

No power to the solenoid, which is usually not an issue with the solenoid but with the thermostat circuit. Easy to find.

Electrical coil is burned out and the valve cannot open, so cooling cannot occur. Easy to identify (Valve does not open with power to the device).

Valve allows refrigerant to leak past, which can be caused by:

These conditions are the most difficult to identify, can significantly impact energy use, and may increase the potential to cause damage to the refrigeration equipment (which could result in product loss due to freezing, or both).

Over the past twenty years, we have observed or identified some of the hardest-to-find conditions that were related to solenoid valve issues. It is easy to identify when the valve fails completely, but when it behaves erratically it can be like trying to find a needle in a haystack. Since the valve is usually assumed to be very reliable, technicians may look at it as a last resort when attempting to find strange behavior of the cooling system. The examples below were only found through real-time monitoring of several operating parameters that revealed issues. But the causes were still not readily apparent, so site visits were necessary to determine the actual culprits.

The figures below are examples of a refrigeration system that operated with its solenoid valve stuck open. As you can see, this meant the system’s cooling was running non-stop even though the thermostat was not calling for cooling.

At one particular site, a number of refrigeration units were identified with stuck solenoid valves through real-time, internet-based monitoring and control. After the customer’s refrigeration mechanic inspected the solenoid problem the first time, it was thought that there was dirt trapped in the valve, or that there was a wiring issue… all were false premises. Since this was a new installation, and this issue had not been observed in the past to such an extreme, everyone was at a loss to the cause of so many units experiencing a problem. It wasn’t until we discovered a bulletin from the valve manufacturer describing the manufacturer defect that the issue could be pinpointed. (If you are experiencing the same issue, please contact us for a copy of the bulletin.)

The other issues in #3 could also present themselves as a stuck-open solenoid. Dirt trapped in the valve can make it appear to be stuck open, as can residual power holding the solenoid in a fully open position.

A slow leak allows a small amount of refrigerant to get through the evaporator. Eventually, there is enough of a pressure change to cause the compressor to start pumping. But since the amount is so small, the compressor only runs for a short burst of a couple of minutes. This can eventually have an effect on the life of the contactor, and the compressor, as with every short burst the crank case oil is pushed out into the piping. This could cause it to operate under low oil conditions. 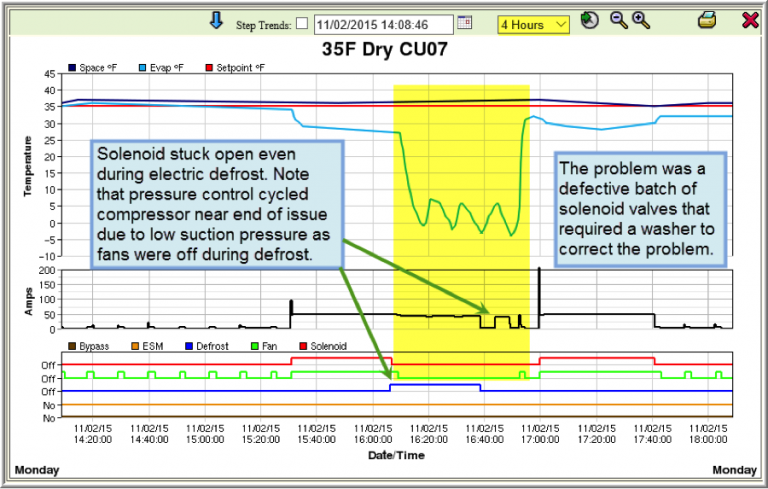 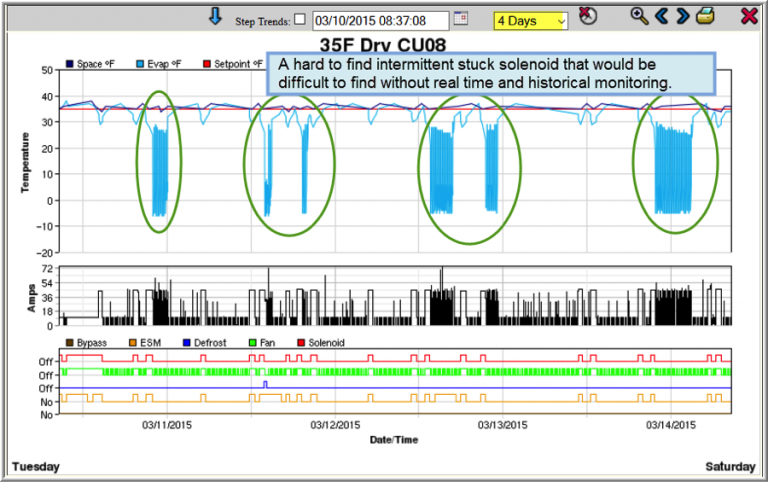 Like with most components in a refrigeration system, issues with the solenoid valve can be averted with proper awareness and a proactive attitude. Whether it’s ensuring the apparatus is appropriately lubricated or free of debris, or replacing an old, worn-down valve, there are measures to prevent a catastrophic failure.

As always, if you are not comfortable doing the inspections yourself, call your refrigeration technician and have them thoroughly inspect the system. With the cost of doing business (and the cost of consuming electricity) continually rising, just letting your cooling system run, and only thinking about it when it fails on a massive scale, isn’t a viable option anymore. We all know what type of financial strain that product loss or compressor failure can have. By proactively making sure your system and its parts are in top working condition, you are positively affecting your company’s long-term bottom line.